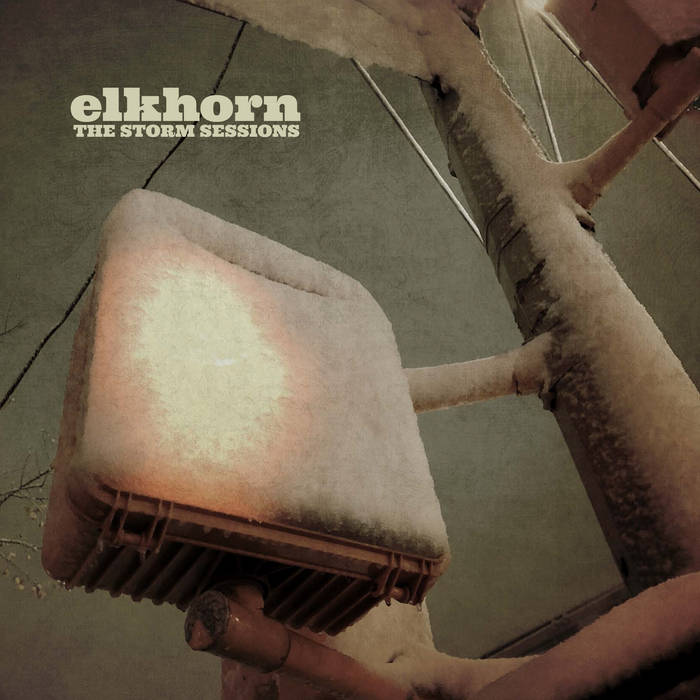 Purchase The Storm Sessions at Beyond Beyond is Beyond:


The Storm Sessions is the latest glowing proof that Elkhorn are one of the most durable and adventurous platforms of the new guitar age. Snowed in with their friend Turner Williams (Ramble Tamble, Guardian Alien) on the night of an emotionally important gig, the duo-plus-one turned it into a cathartic blizzard-bound collaboration and rumination — and a new step for Elkhorn.

A powerful turn outside the duo’s comfort zone, The Storm Sessions consists of two side-long improvisations by guitarists Jesse Sheppard (12-string acoustic) and Drew Gardner (6-string electric) along with Turner’s rare and lovely vibrations (electric bouzouki on one side, shahi baaja on the flip). No strangers to improvisation or collaboration, The Storm Sessions is their most spontaneous studio work yet, and perhaps their most beautifully flowing.

Formed by old friends Jesse Sheppard and Drew Gardner in 2013 and naming themselves “Elkhorn” the following year, it’s the pair’s telepathic bond that has made them so much more than two dudes with guitars. With Sheppard’s rigorous 12-string acting like a meditative rhythm section for Gardner’s textured flights, the duo’s third voice emerges into a space that often borders on soulful cosmic jazz.

Committed collaborators and community organizers in their vibrational corner of the world, both members of the band are deep students of the music. In 2018, Sheppard organized The 1000 Incarnations of the Rose, an already historic three-day festival in Takoma Park, Maryland—John Fahey’s hometown—that showcased generations of wide-eared guitarists. Ambassadors to an often-hidden creative lineage as well as an often-hidden network of modern players, Elkhorn have hewn to the most sage advice Timothy Leary ever proclaimed: Find the others.

Mark Fosson (who played the 1000 Incarnations of the Rose) was one such Other, forming a cross-generational bond with Sheppard. Scheduled to play a New York show with Elkhorn in late 2018, the 68-year-old Fosson fell ill and passed away. A rescheduled performance featuring Williams (another Other) turned into the extended session in Gardner’s home studio in Harlem.

The Storm Sessions is filled with flickering textures that might create warmth on a cold day, or a bubble of human atmosphere inside a dreary dystopian vacuum, no matter the weather outside. Their sixth full-length in five years, Elkhorn are both well into their journey and have only just begun.

Guitar duo featuring Jesse Sheppard on twelve-string acoustic and Drew Gardner on electric, interweaving the extended folk tradition with psychedelic improvisation, moving freely from pre-rock to post-rock and beyond.

Bandcamp Daily  your guide to the world of Bandcamp